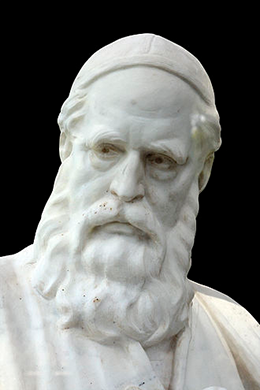 Who Was Omar Khayyam?

Author of The Rubaiyat

(A poem translated into English by Edward Fitzgerald)

The Moving Finger writes; and having writ, moves on...

What We Know About Him

Omar Khayyam (sometimes spelled Khaiyyam) was born in Naishapur, Khorassan (in the northeast area of modern day Iran, also known as Persia) in the latter half of the 11th century, A.D. He died in 1123. His birth name was Ghiyāth ad-Dīn Abu'l-Fatḥ ʿUmar ibn Ibrāhīm al-Khayyām Nīshāpūrī.

He was a student of the Imam Mowaffak of Naishapur. One of Omar's fellow students, Nizam-ul-Mulk, became the Vizier of Alp Arslan the Son and Malik Shah the Grandson of Toghrul Beg the Tartar, who ruled Persia and founded the Seljukian Dynasty. When this man became Vizier, Omar asked if he could live under "the shadow" of his schoolmate's good fortune, to spread word of the advantages of science and to pray for him. Omar, once a tent-maker, was given a yearly pension and proceeded to study many subjects, becoming especially proficient in Astronomy.

The Malik Shah appointed Omar Khayyam to help reform the calendar, and he and seven other learned men created the Jalali era system which reportedly surpassed the Julian calendar's accuracy and came close to that of the Gregorian. He was also a poet and philosopher.

When he died at Naishapur in the year of the Hegira, 517 (A.D. 1123), he was praised as one who was unrivaled in science. However, he was not universally respected. His bold ideas threatened some segments of society, including the more conservative Islamic sects. Although not an ambitious man by most standards, he enjoyed the pleasures offered by the world, and he did not blindly accept the precepts of religion.

What We Know About His Poetry:

He wrote hundreds of poetic quatrains, but "The Rubaiyat" with which most Westerners are familiar is only a small portion of his writings. They were "liberally" selected and translated into English by Edward J. Fitzgerald, and several versions of these translations exist. Some Persian writers have expressed concern about these admittedly "free" translations, which Fitzgerald himself called "transmogrifications." Many of the verses were paraphrased, and some of them cannot be traced to an original quatrain.

The first version of Fitzgerald's translations appeared in 1859, and Fitzgerald himself made changes in a later versions in 1868, 1872, 1879, and 1889. Several other translations have been published, many with wildly different interpretations of the poet's original verses. A "new" translation by Robert Graves and Omar Ali-Shah was published in 1968, under the title The Original Rubaiyyat of Omar Khayyam.

For example, one of the more famous quatrains, "The Moving Finger writes, and having writ, Moves on; nor all thy Piety nor Wit Shall lure it back to cancel half a Line" was translated by Graves and Ali-Shah as "What we shall be is written, and we are so. Heedless of God or Evil, pen, write on!"

By the way, "Rubaiyat" means "quatrains" -- verses of four lines.

Selected Quatrains from "The Rubaiyat" of Omar Khayyam. 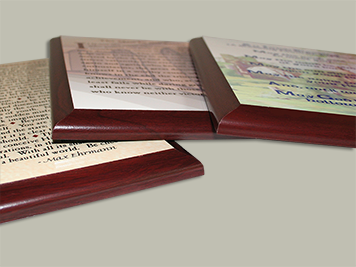 The poem and background image are imprinted permanently on the surface of the plaque. 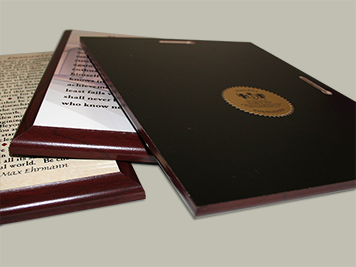 The Perfect Size for Wall Displays

Our 9" x 12" plaques feature a 5/8" deep cherry-mahogany beveled edge, and the back has carved holes so that they are ready to mount on your wall!