Go placidly amid the noise and the haste, and remember what peace there may be in silence....

The full text of "Desiderata" is available here.

The Confused History of "Desiderata"

The author is Max Ehrmann, a poet and lawyer from Terre Haute, Indiana, who lived from 1872 to 1945. It has been reported that Desiderata was inspired by an urge that Ehrmann wrote about in his diary:

"I should like, if I could, to leave a humble gift -- a bit of chaste prose that had caught up some noble moods."

Around 1959, the Rev. Frederick Kates, the rector of St. Paul's Church in Baltimore, Maryland, used the poem in a collection of devotional materials he compiled for his congregation. (Some years earlier he had come across a copy of Desiderata.) At the top of the handout was the notation, "Old St. Paul's Church, Baltimore A.C. 1692." The church was founded in 1692. [1]

As the material was handed from one friend to another, the authorship became clouded. Copies with the "Old St. Paul's Church" notation were printed and distributed liberally in the years that followed. It is perhaps understandable that a later publisher would interpret this notation as meaning that the poem itself was found in Old St. Paul's Church, dated 1692. This notation no doubt added to the charm and historic appeal of the poem, despite the fact that the actual language in the poem suggests a more modern origin. The poem was popular prose for the "make peace, not war" movement of the 1960s.

When Adlai Stevenson died in 1965, a guest in his home found a copy of Desiderata near his bedside and discovered that Stevenson had planned to use it in his Christmas cards. The publicity that followed gave widespread fame to the poem as well as the mistaken relationship to St. Paul's Church. [1]

This misinterpretation has only added to the confusion concerning whether or not the poem is in the public domain.

Desiderata is Latin and has been interpreted as "Things to be Desired" or "Things Desired As Essential."

Is Desiderata in the Public Domain or Copyrighted?

Max Ehrmann obtained a federal copyright for Desiderata in 1927 (No. 962402). [2] It was also printed in a collection of his poems published in 1948. The copyright was bequeathed to his widow, Bertha, who renewed the copyright in 1954. At her death in 1962, she bequeathed the copyright to her nephew, Richmond Wight. Wight assigned the copyright (for an undisclosed fee) to Crescendo Publishing Co. in 1971.

The poem was published in the August, 1971 issue of Success Unlimited magazine, and Robert L. Bell, the owner of Crescendo Publishing Co., filed a copyright infringement suit against the publisher, Combined Registry Co. [3]

The defense argued that the copyright had been forfeited and abandoned. Three instances of distribution were alleged to support forfeiture:

The Copyright Act requires copyright notice on materials that one seeks to have protected. [17 U.S.C. Section 10] Forfeiture occurs when the copyright holder authorizes general publication without the correct notice.

However, the court concluded that the correspondence between Moore and Ehrmann was credible evidence of a general publication authorized by the copyright holder. "Permission to use the work was given gratuitously," and nowhere was a copyright or copyright notice mentioned. Ehrmann had therefore forfeited his right to have the copyright protected. [2]

The federal district court found in favor of the defendants, the 7th Circuit Court of Appeals affirmed that decision, and the U.S. Supreme Court declined to hear the case. [See citations below]

However, Mr. Bell has been successful in pursuing his copyright claim in other jurisdictions of the United States. One can argue that Mr. Ehrmann tried to protect his copyright, as evidenced by a copy of the poem published by the Indiana Publishing Co. that clearly bears the 1927 copyright notice.

It seems that the courts cannot agree on this issue. Thus, whether or not this poem is in the public domain depends upon your point of view and your place of residence.

"Be Cheerful" or "Be Careful"?

There is some dispute regarding this phrase near the end of Desiderata. One of the publishers claims that Ehrmann himself changed the wording. Another story is that an errant publisher accidently changed it from "cheerful" to "careful."

We have chosen to use "cheerful" because it seems more in tune with the rest of the poem, and it appears in a version published by the Indiana Publishing Co. during Mr. Ehrmann's lifetime. We'll update this section if we discover more evidence of the truth. 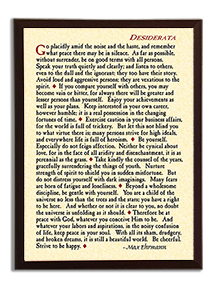