Heraldry In History: Much Ado About "Azure"

An Ancient Legal Dispute Over A Coat of Arms 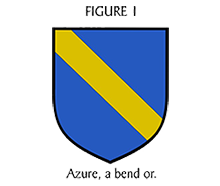 The right to claim a particular coat of arms design as one's own has been debated continually throughout the centuries. Even the oldest, simplest designs were the subject of dispute.

In two of the earliest legal proceedings concerning heraldry in England, the matter was undertaken with the utmost seriousness. In the late 14th century, William Carminow, Sheriff of Cornwall during Edward III's reign, accompanied the King on a trip to Paris. Carminow was less than amused when he realized that another member of the traveling party was using a coat of arms that was remarkably similar to his own, "Azure, a bend or" -- a blue shield with a gold diagonal bar. How appalling! (See Figure 1) 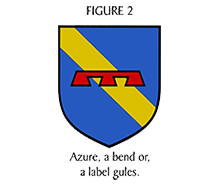 The offending party was Richard le Scrope, the King's own Chancellor of the Exchequer. Scrope was not about to change his coat of arms, so Carminow sued Scrope, presumably hoping to establish the good sheriff's exclusive right to bear the blue and gold shield. Scrope claimed that his family had used this coat of arms since the Norman Conquest, but there is a notable lack of historical evidence documenting coats of arms prior to the 1300s. Scrope's evidence was mostly verbal testimony from others who had seen his ancestors bear the same coat of arms. 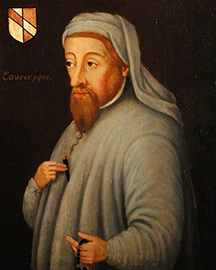 Awarded by King Arthur of Camelot?

Carminow had an even more unprovable claim — that his arms were by virtue of a grant from King Arthur of Camelot fame. Unfortunately for us, the records are unclear about the court's ruling. Scrope continued to use the coat of arms in question, and all available versions of Carminow's arms include one additional element, a red label. (See Figure 2) Some have speculated that label was always there, which made the coat of arms sufficiently distinct in the eyes of the court. However, Burke's General Armory of England, Scotland, Ireland and Wales describes the Carminow coat of arms without the label, so we may never know the true outcome of the trial. 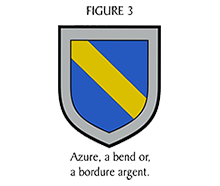 In 1385, the same blue and gold arms were once again in dispute. This time it was Scrope who filed suit. While with Richard II's troops on a campaign into Scotland, Scrope encountered another "Azure, a bend or" shield, this time being borne by one Robert Grosvenor. During four years of testimony, Scrope produced such witnesses as the King's uncle and the poet Chaucer, all to attest that Scrope's ancestors had continually borne the contested coat of arms since the Norman Conquest. 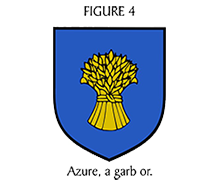 The court must have been impressed with Scrope's testimonials (or the prominence of those testifying), because the record shows that Grosvenor was ordered to add a silver border (bordure argent; see Figure 3) around his shield design. Alas, that was not the end of the matter. Grosvenor objected to the idea of adding a border, largely because some of Scrope's relatives were already using that design. He envisioned himself in a constant string of legal disputes over the new design, so he appealed the decision to the King.

The King ordered Grosvenor to adopt a totally new coat of arms, which he did: "Azure, a garb or." (See Figure 4) It was still blue and gold, but the garb (a wheatsheaf) took the place of the diagonal bar. At least he didn't have to change the colors of his accessories! Unfortunately for Scrope, who later became Archbishop of Canterbury, his fortunes turned sour a few years later when he was beheaded for betraying Richard II's successor, Henry IV. 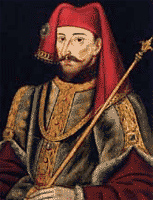 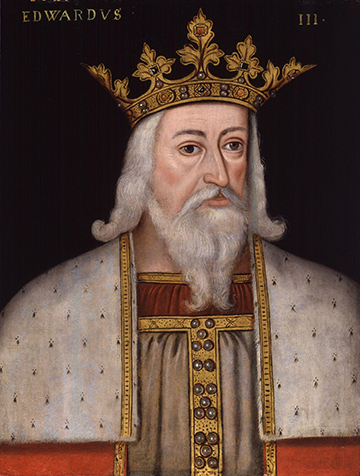 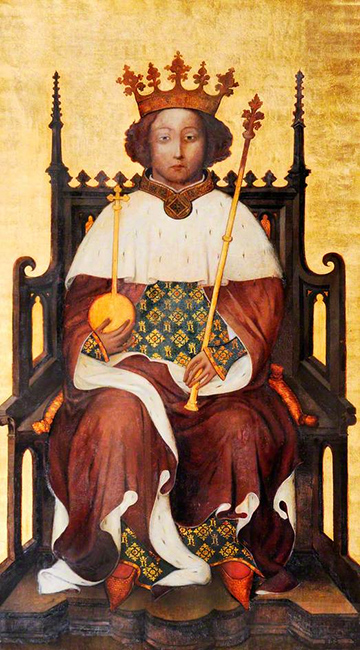